There I was, answering one person about another with a less-than-complimentary but truthful comment–and Surprise! That person I described was in the room and heard me. 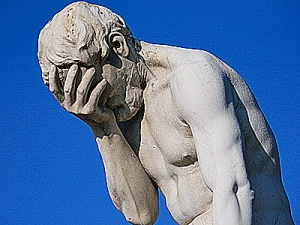 Remember the awful feelings of grade school playground dramas?  Yep, suddenly I did too.  The thing is, I know better than that.  And I act better than that.What I said was true, it was not malicious, and it was honest.  The only thing is, if I had known the person could hear I would not have said it–because it was also painful.

Although the individual changed their behavior, I know better than to behave the way I did about it.  Names will not be mentioned, to protect the innocent–which is certainly not me.

My friend Wendy has a wonderful theory about when this happens.  Sometimes we need an angelic boot to the head (ok, I am paraphrasing) in order to grow to the next level.  Sometimes we give, sometimes we receive (in my most recent case I gave), but both parties facilitate this chance to learn and grow if we let it.  Those Oh-Crap moments are actually divine.

If I were to remain stuck in the past, in the I-can’t-believe-I-did-that portion, I don’t get to move forward and see the higher good.  By embracing the hugely uncomfortable part of where I screwed up, I can empty my ego and open to the growth lesson.  It also changes my attitude toward the other person from frustration to compassion.

Sometimes both parties work through this together, and sometimes it is two solo processes.  Currently I’m working on this one myself while I send prayers to the other party.  And then I have to let it go.

The thought that the angels give us these situations because we are each ready for a growth opportunity comforts me.  It makes me feel better than the idea of taking a bad situation and making something good out of it, which by the way is not a bad way to look at it either.  Seeing the Divine in the Oh-Crap elevates it to Holy.

← Be What You Love to Do
Through Indigo’s Eyes →