The Archetype of Independence 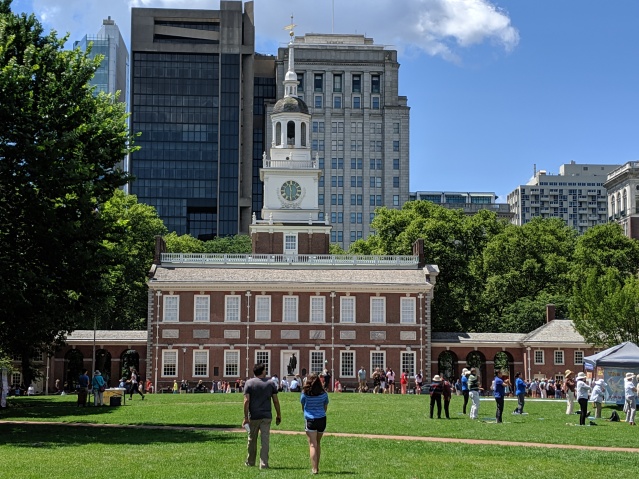 I very recently had the opportunity to visit historic Philadelphia for the first time. I assumed my connection to the place would come from the true awesomeness of being able to stand in places and touch items that are deeply profound to our great nation’s creation.

Yes, and… A full-body Holy Wow:

Physically standing in our nation’s history simultaneously with my own, I profoundly realized an Archetype of Independence. This became especially clear during a guided tour of Independence Hall. This archetypal pattern of Independence supports and guides us today, when we have to make the personal hard choices of breaking away in order to be true to ourselves. Whether physically or metaphorically.

Think about an intensely difficult choice you have had to make, or perhaps are in the midst of making. Redefining a relationship? Moving for a great job offer? Go deep. We’re talking about a type of decision that keeps you up at night. Repeatedly.

As a country, we did NOT want to break away and be separate. We tried and tried and tried to work together, to come to agreement, and to stay together. The other side Just. Wouldn’t. Work. Together. Was not interested in any change, growth, or forward movement. Only wanted Old Patterns. When we finally got to our answer of Independence, it was a last resort. THE last resort. And we were terrified of Independence. The Divine right answer was not the easy way.

Also, there was a lifestyle of back and forth: Do we or don’t we? What in Heaven’s name is the right answer. We could see both sides, and carried much angst about which we should choose.

On the personal level too, it was essentially civil war. Next door neighbors were on one side of Independence or the other. The folks you bought your goods from, EVERYONE living together were on opposing viewpoints about what was the right choice to make. This was the tone and atmosphere as people moved through their days together, interacting with each other.

This atmosphere did not dissolve once a decision was made, either. The process continued well beyond the declaration. Making the hard choice is difficult; living the New Pattern has its challenges as well.

And ooohhh, Independence has led to SO much growth! It led to equality–economically, gender, race… And on and on and on. It is STILL happening today — religion, sexual orientation,  NONE of this would have developed if we had chosen our Old Patterns. And our growth affected other countries in this too, as we set examples that led to their change and growth as well. For the overall good of humanity.

Can you see this pattern on a personal level? Perhaps with what is keeping you up at night? Holy wow.

Because you are being Divinely guided and you are authentically unfolding within that, the Archetype of Independence ultimately brings personal wild abundance and joy.  (Yes, but not at the time…)

For me, the Independence Archetype Aha about my past regards a painful divorce fifteen years ago. The gift I’ve received now is a deeper level of clarity, understanding, and compassion for myself and my then-process of confusion and turmoil.

Yet there is another Independence Archetype Aha about my present. I am learning to identify my truth, stand in it, and honestly share that without fearing disconnection from by beloved. I am learning how to honor myself and invite the other, holding space for each of us without taking on their emotions and feelings. To allow (and celebrate!) each of our (sometimes very different!) processes, in true partnership.

How about you? Where in your life do you see this Archetype of Independence has occurred? How can this awareness now bring you some peace about then? Is there something currently growing for you today that this archetype awareness could help guide you with?